The thought that cancer could come into her life and completely change her perspective had never crossed Adriana Krnáčová's mind. Not until recently. Adriana decided to concentrate on the fact that this experience would eventually make her stronger. She consciously replaced her feelings of hopelessness with an interest in psychological development and did not allow herself to be paralyzed by fear. During her journey, Adriana realized that your way of thinking affects the outcomes of treatment. In an interview with the Proton Therapy Center, the former patient shares with readers why, in a sense, the cancer diagnosis has become a gift for her.

How did you find out about your diagnosis?
While practising sport, my shoulder hurt for no particular reason. I first consulted about this issue with my orthopedist, who sent me for an ultrasound, where the doctor referred me to the Mammalogy Deparment. I was referred to the General University Hospital in Prague. Two days after the biopsy, I found out I had breast cancer with lymph node metastases.

In that moment you must have experienced a big shock…
As a sports-minded person, I absolutely did not expect such a diagnosis. All the more so because we do not even have a genetic predisposition to cancer in the family. Fortunately, I quickly reached prof. MUDr. Tesařová, whose care I trust with complete confidence. In addition to my diagnosis, the coronavirus pandemic broke out, which complicated treatment. On the other hand, the gradual introduction of restraint measures has allowed me to focus fully on treatment.

You have undergone mastectomy (breast removal surgery). For a woman, this is a sensitive topic unconditionally connected with the perception of her own womanhood. Where did you find motivation and hope before and after the surgery?
I first underwent chemotherapy, which worked relatively well in my case. Only then did surgery await me. It was necessary to remove all carcinogenic residues from my body. At that moment, I knew I had no choice - either I wanted to live or to kept my breast. It was a painful decision. Especially as a woman, it burdoned me psychologically and emotionally, but I knew I wanted to live.

What helps in such moments?
I've lived a rather rich but also challenging life, so I had an inner strength that motivated me. But what helps the most in such moments is the support of friends and loved ones. They won't let you give up. They're the ones who say a breast is just a piece of meat, and that the important thing is that I'm alive. Although it was difficult to cope with feelings of inferiority, I knew that breasts could be reconstructed.

How did you find out about proton beam therapy?
I worked in healthcare for a while, so I knew about the Proton Therapy Center. My finding in the breast was close to the heart and lungs, so it was necessary for the radiation to be precisely targeted to the tumor while minimizing the impact on the surrounding organs and tissues. The Proton Therapy Center offers a completely different environment than conventional hospitals. Only oncological patients are treated here and, despite their diagnosis, they find the energy and a positive mood here. The team that treated me and the care I have received here were absolutely professional and great. I am incredibly grateful to them for everything.

So did the environment have a big effect on your psyche during treatment?
Certainly, I even baked cakes and strudel! The Proton Therapy Center's staff and I liked each other. I tried to be an optimistic patient and on the second floor, where treatment is held, there were simply great people. The human aspect was one of the main factors that motivated me during the treatment.

Does fear play a big role during treatment?
At the beginning, yes. You don't know how it will all go. Will it hurt? Can you do it? Thousands of questions raced through my head, fear pervaded me, my throat tightened. I couldn't eat or sleep. The truth is that everyone is fragile inside, and I got out of the worst first few weeks with the help of an oncopsychologist, Dr. Janáčková. Then I declared war on my illness and made a contract with myself to run a half marathon this September. My partner also helped me a lot in these moments. Whenever I was in a bad mood, he would say that if we have gone so far, we could go another step - I am infinitely grateful to him for that.

Did working with your own consciousness have a therapeutic effect on you?
Neuroscience says that it takes 21 days for a person to transform a feeling. I dealt with it quite intensively. I wanted to know what was going on inside me. You know, the brain works like an ever-present whisperer, so you need to train it in the direction you want to go. It is a conscious stimulation of the mind - to convince the subconscious that everything will be fine. It was and still is a form of some inner cleansing for me. I believe that everything that came into my life had come for a reason.

Do you approach your illness the same way?
For the last five years, before the illness, I was exposed to permanent work stress. I eventually left my demanding position and lived a peaceful life with my partner for a year. Then it erupted. I am convinced that some diseases come to people as a result of their environment. Nice people are often affected by external circumstances too much, which affects their immune system. That's what cancer is all about - an imbalance. Balance is extremely important and I brought the disease into my life due to demanding lifestyle and stress. I had to go through a difficult chemotherapy, lost my hair, experienced states of incredible fatigue, when I couldn't even do three steps… but I did not let go of my inner routine and followed all the established rituals. That is the role of the psyche in the disease. Every hell has an end, but not everyone is able to see it while battling a disease, it's hard…

Let's go back to the feminine side of this disease, where women not only cope with the diagnosis as such, but really get self-aware. What could we pass on from your experience to other patients?
I would really like to help people who have reached the bottom so that they can then bounce back. Especially for women - it often happens that their partner leaves them during or after the illness. Unfortunately, there is no paid form of psychological support for the patient's family, such as psychooncology, in the Czech Republic yet. I don't think that's fair, because cancer doesn't only affect the patient, but the whole family. Loved ones also suffer greatly from the disease, because they often have no choice but to take into account the degradation of the patient. For women, this is even more complicated, because breast removal can have a very intense impact on your partner's perception of you as a woman. Therefore, I would definitely advise patience, learning to say that I am still as beautiful as I was, that I simply can accept myself. I consciously tried to increase my self-confidence and I bragged about every progress and everything I went through. Breast loss is not permanent and this loss should be seen as a tax for staying alive… we only carry one less kilo of meat.

Thus, during treatment, a person reconstructs not only the body, but also the mental potential. Do you feel that you have learned something new about yourself?
Absolutely! I learned who I am, what my worries, abilities, and desires are. Also, what mistakes I made in the past and I don't want to repeat. How to deal with some difficult things. I realized that it is extremely important to love yourself, to be in the company of people you want to be with and who can express mutual support. I have become an expert in crisis management.

What role does humility play in the disease? Like the disease itself, the patient certainly goes through various stages…
The disease is an experience. Of course, I cannot speak for all patients, but this experience teaches you a lot. The disease "trains" not only the patient, but also their surroundings. I was inspired by a lesson from an IT guru who says that a person's level of intelligence is determined by how they accept things they can't change. Of course, in the beginning it was difficult. I did not understand why me and what have I done wrong. But then I settled it in my head and simply said to myself: "The disease is here and treatment will follow. You will do everything in your power to make yourself and everyone who cares for you successful." It's teamwork and treatment management is not simple - chemotherapy, sampling, check-ups, examinations... it keeps you busy, you're constantly on the move. But I was able to rise above it: I called my wig "chihuahua", and I treated the deep inspiration breath hold training as a video game. Deep inside, I always knew that everything would be fine. I kept my hopes up and I was adamant about my recovery. In a way, I became a better, though different, person. Life is beautiful and not everything is cancer. It is important to know that it is possible to get out of this disease, even if it is difficult, complicated and sometimes unbearable. But one must never give up. 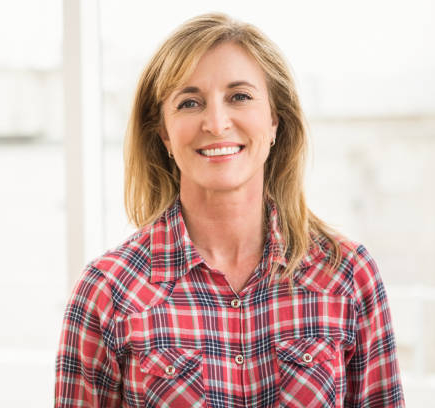